The IPCC AR6 Climate Change Report: Everything You Need to Know 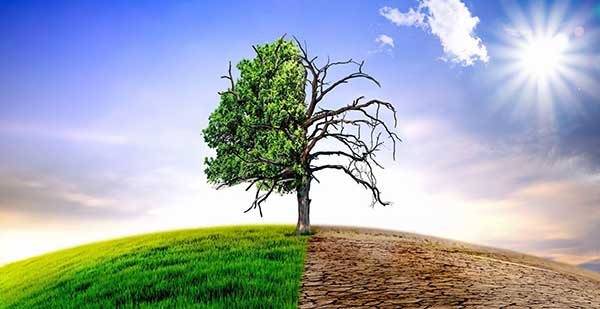 From this report, a stark warning was issued: Humanity is now in code red in terms of the climate, which means we either act now or face irreversible consequences. This may sound the same as previous reports and warnings, but this sixth iteration is more pointed — with a higher degree of confidence — than previous versions.

Below covers some of the main points of the physical science basis contained within the report, from the current state of the climate to future possibilities and potential adaptations.

The Current State of the Climate

It has long been known that human activities have warmed the atmosphere, ocean, and land; now it has become unequivocal. This has been stated in each of the previous IPCC reports with increasing certainty. AR6 states with the highest level of confidence that this is the case — it is simply not up for debate. The climate is warming, and human activity is the main driver, meaning it is responsible for more than 50% of the change.

Recent widespread and rapid changes have been observed in the atmosphere, ocean, cryosphere, and biosphere, the rate of which is unprecedented in recorded history. In 2019, atmospheric carbon dioxide (CO2) concentrations were higher than at any time over the past 2 million years, and possibly longer. Increases in CO2 over the past century have greatly exceeded natural changes between glacial and interglacial periods, which occur over millennia.

In addition, global surface temperatures have increased faster since 1970 than in any other 50-year period over at least the past several thousand years — and temperatures during the most recent decade exceed those of any multi-century warming period over the past 125,000 years.

While there is some level of natural variability in the climate, the IPCC has determined, with the highest degree of certainty, that human-induced climate change is already affecting many weather and climate extremes in every region across the globe. This comes from evidence of observed changes in extremes such as heatwaves, heavy precipitation, droughts, and tropical cyclones. But most of all, the evidence that these are all attributable to human influence has strengthened since AR5, the IPCC Fifth Assessment Report.

According to the AR6 report, it is virtually certain that weather extremes are being affected by human activities. Heat waves have become more frequent and more intense, while cold snaps have become less frequent and less severe. This has been a trend since the 1950s, and it has continued to ramp up as more CO2 enters the atmosphere — some heat waves over the past decade would have been extremely unlikely to occur without human influence affecting the global climate system, including marine heat waves, which have doubled in frequency since the 1980s.

The frequency and intensity of heavy precipitation events have also increased since the 1950s — and both agricultural and ecological droughts have also increased in several regions around the globe — with human-induced climate change being attributed as the main source of these precipitation pattern changes. And while it is not with as high confidence, it is still likely that human activities have increased intensity of tropical cyclones, also known as hurricanes or typhoons, as the global proportion of tropical cyclones entering Category 3-5 classification has increased over the past half a century.

Where Are We Headed?

Regardless of what we do today, as individuals or as a collective, global society, worldwide surface temperatures will continue to increase until at least 2050. This is true for all emissions scenarios considered under the IPCC AR6 report — from very high to very low global greenhouse gas (GHG) emission output levels. Beyond that, warming of 2 degrees Celsius will be exceeded during the 21st century unless deep reductions in CO2 and other GHG emissions occur immediately, starting now and continuing to rapidly decrease over the coming decades.

It is imperative to act now because many changes in the climate system become larger in direct relation to increasing global warming. The frequency and intensity of heat waves, heavy precipitation, droughts, and intense tropical cyclones (as well as reductions in Arctic sea ice and increases in sea level rise) are all exacerbated by warming temperatures — slight warming compounds climatic effects, which further drives changes in temperature, precipitation, sea levels, and sea ice cover.

Continued warming is also projected to further affect the global water cycle in a way that will make obtaining clean water a challenge for a significant percentage of the global population. And under scenarios with increasing CO2 emissions, the ocean and land carbon sinks will have a decreasing ability to store atmospheric CO2, further compounding the effects of CO2 emissions.

Many of the aforementioned changes are already irreversible, at least for hundreds (or possibly thousands) of years. This is true especially for changes in ice sheets, global sea levels, and ocean currents, if they are affected. Because of this, climate adaptation must become a major focus of environmental policies in the future. Even if we make immediate, significant reductions in CO2 emissions, there will still need to be some degree of climate adaptation for many people on the planet.

Climate adaptations are a way of responding to the current and future impacts of climate change. Some examples of climate adaptations include reducing emissions from cars, preparing for an increase in power outages, and building flood barriers. These modifications will be important to consider in planning for any and all possible changes that could result from land and sea changes, especially if we go past the 2 degrees Celsius mark.

With further global warming, the AR6 report claims that every region, on every continent, will experience increasing, concurrent, and multiple changes in several climatic impact drivers. However, it is important to note that these would be more impactful and widespread at 2 degrees Celsius rather than at 1.5 degrees Celsius global warming over levels from 1850-1900 — and even more devastating for higher warming levels.

This is why it is crucial to act now and aim for an increase of no more than 1.5 degrees Celsius in global surface temperatures. At this level, there will still be climate adaptations that need to be made, but it will be much closer to the current state of the world than if we go even a half-degree higher.

From a physical science perspective, limiting human-induced climate change to less than a 1.5 degrees Celsius increase requires several immediate actions. These include:

The AR6 report defines several possible future global emissions scenarios that we will possibly follow: very high, high, low, and very low. If the low or very low scenarios end up being true, global GHG emission levels lead to discernible effects on atmospheric GHG concentrations and air quality within just a few years. This is in comparison to the high and very high scenarios, where GHG emissions will lead to exponentially increased levels and likely devastating ecological effects. Under these contrasting scenarios of high and low future emissions output, the IPCC report describes with the highest level of confidence that discernible differences in global surface temperatures would be apparent within about 20 years.

Main Takeaways From the AR6 Report

There are countless takeaways from the IPCC AR6 report, from understanding that some impacts are unavoidable even with immediate action, to the declaration that warming of 1.5 degrees C will be exceeded during this century unless deep reductions in GHGs occur in the very near term. Below are some of the most important aspects that should be considered:

It is now unequivocal that human activities have warmed and continue to warm the global atmosphere and oceans.

Recent widespread and rapid changes have been observed in the atmosphere, ocean, cryosphere, and biosphere, the rate of which is unprecedented in recorded history.

Many small climatic system changes become larger in direct relation to increasing warming temperatures, even by only fractions of a degree. With every tiny incremental change in overall surface temperatures, there are corresponding changes that get larger disproportionally, such as with precipitation and soil moisture.

Many changes due to past GHG emissions will be irreversible for hundreds or thousands of years, especially changes in the ocean, ice sheets, and global sea level.

Regardless of what we do today, as individuals or as a collective, global society, worldwide surface temperatures will continue to increase until at least 2050.

Climate adaptations to adjust to the realities of living with changes in surface temperatures, precipitation levels, and sea levels are emerging and will become increasingly important in coming years.

But perhaps the greatest takeaway of all is that global warming of 1.5 degrees C — relative to the years 1850-1900 — would be exceeded during the 21st century under the intermediate, high, and very high scenarios considered in the AR6 report.

If this is not a clear enough picture of what can happen if we fail to act — and how we still have the ability to stave off the worst predictions if we act immediately — then it is likely that the entire world will be forced into climate adaptation, with absolutely no choice in the matter. The time for choice is now; it will not be possible in the future.

Brought to you by terrapass.com
Featured image

The post The IPCC AR6 Climate Change Report: Everything You Need to Know appeared first on terrapass.